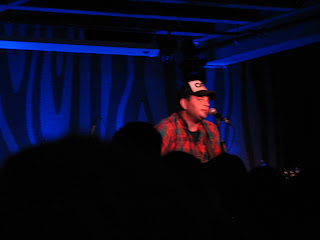 I'm not calling this a concert review because I was only there for two songs, possibly three. A personal anecdote explaining that will occur at the end of the post.

The Homeless Gospel Choir is a one man band from Pittsburgh, consisting of Derek Zanetti.

When introducing himself he at one point referred to punk, with this being a place where everyone was welcome. That is fair. In many ways the sound is more reminiscent of folk. That is partially a result of having a singer accompanying himself on guitar, but it is also there in the spirit of the music, which is politically and socially aware. Also, he said "This is a protest song," before each song ("With God On Our Side" and "Musical Preference" if I recall correctly), which is not present in all folk but there is a tradition there.

I would say that the music is mellower than punk, but the tempo often gets quite fast, and the emotions are actually pretty punk.

He comes up with interesting rhythms. "Live News Feed" is pretty funky and "Sometimes I Feel Like A Stranger" almost feels Hawaiian.

With only the self-accompaniment, instruments never drown Zanetti out. This means that the profanity is really noticeable. It stands out, and I don't think it particularly underscores the songs either - it seems habitual more than effective. So that's something to know going in if that is something that bothers you. That being said, it does not allow for how completely likable he is.

There were pretty long lines to get in, which ended up not being an issue due to the show starting a bit late. Before we knew that, I heard various fans expressing concern about missing "Derek". He was not the headliner, but you could hear that they felt connection and affection for him.

That makes sense. He comes through completely in the songs, where you are not likely to get lost so much in the music as becoming awake to the music, which is good for the messages that he shares.

(And that air of welcome and goodness makes The Homeless Gospel Choir a good touring match with the Cellabration.)

I'm glad for what I was able to hear, and was sorry not to see more, but the music remains.

I do believe that it is more powerful to see him live than merely listening, so if you get an opportunity you should take it.

*Why I missed the show.

I have written earlier about my mother starting to have some memory issues. She dropped me off at the train, which she has done many times, but then she didn't make it home. I was starting to worry when I was in line, and becoming frantic by the time I got in, especially because this was all my fault. I was in contact with my sisters, and I pretty much knew that she would be located and home before I could get there, especially since that would take over an hour on public transportation.

Because of that it made no sense for me to leave, and I knew that, but a wrong number on my phone sent me over the edge, and I couldn't do it. She was in fact located and home before I even got over the West Hills, but I was not at that time capable of being logical. I could only have been a buzzkill for anyone around me anyway. Fortunately, this is normal on Tri-Met.

The irony is that having gone to Frank Iero shows twice, this is the second time I have been an emotional wreck and had to leave early. I may need to quit seeing him, but I really like him.
Posted by sporktastic at 4:55 PM