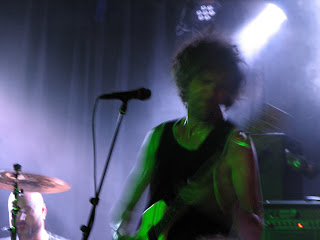 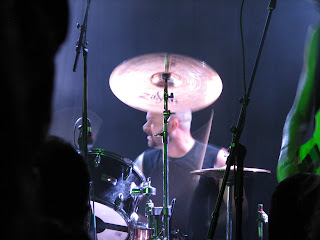 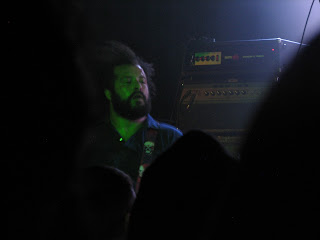 House Of Lightning played second on the bill. This was Torche drummer Rick Smith's other band, playing with Henry Wilson and Eric Hernandez.

Wilson has also played with Torche's Steve Brooks in Floor, and this was the band where the sound was most similar to Torche. I have seen House Of Lightning listed as Art Metal, but I believe fans of classic rock would enjoy them. They remind me at times of Led Zeppelin, especially on "Downbeat Situation".

There is a level of detail in the guitar playing that almost belies the aggression of the beat. You could bang your head to it, and the crowd was largely keeping time with their heads and feet. Check out "Wheels I-II-III" for a sense of that.

Perhaps because the members are involved in other projects it explains the lack of a strong online presence. While I have multiple links, the Bandcamp site is for the label, there is only one tweet (a re-tweet), and the links they have to the MySpace site just take you to the main page, though you can find content with some searching. (Plus, it's MySpace.)

The Facebook page is probably the best source of information at this time. I put up what I could find.

Check them out if you get a chance.