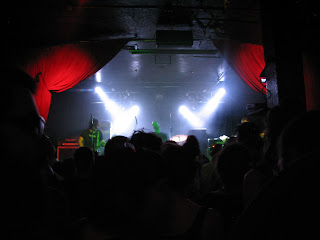 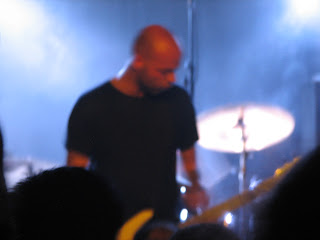 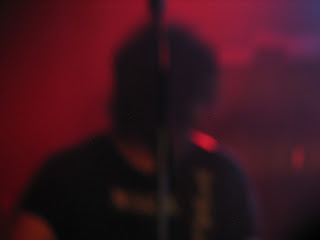 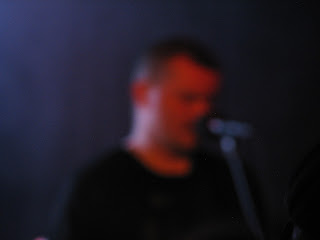 I have finally seen Torche live. It was on the list.

For full disclosure, although I listen to Torche I am not really visually familiar with them, and I had no prior knowledge of the other bands. Dante's is not a large venue, so  I saw some members and was pretty sure it was them, but I also wasn't sure what order the bands were playing in. Therefore, as Torche took the stage I was still not certain they were Torche. Then they started playing.

The music hit me, setting off vibrations down my throat and into my gut, and yeah, that's them.

It was still revelatory to see them play.

Watching bassist Jonathan Nuñez waiting to go on, he reminded me a little of Tom Morello - a little bit for physical resemblance but much more for the sense of pent up energy below the surface.

That feeling remained when he took center stage, but it was then surprising when he began to play with so much fluidity. His arms and neck were loose! Taking in the whole scene I saw that guitarists Andrew Elstner and Steve Brooks also had similar playing styles. There is a tightness and hardness to the sound that was not visible. The wall of rock still blasts you audibly, but you see much more flow than you would expect of sludge. And I didn't expect that, but amazing me is what they always do anyway, so it fit.

I did not have a good view of drummer Rick Smith for most of their set, but I have a picture of him from the House of Lighting set immediately before. I need to give him credit for that. The only other musician I have known to tour with himself is Steve Perry when he does both White Hot Odyssey and Cherry Poppin' Daddies.

It was a really good show all around, so I would be glad I was there anyway, but it was Torche I'd been waiting for and they did not disappoint.

Seeing them is a thrill.